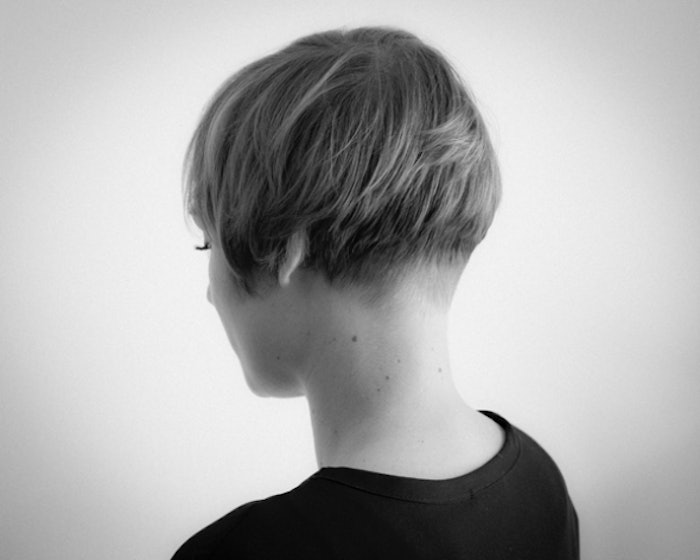 Sam Villa ArTeam member, David Boyd, refers to the hairline as the frame for the masterpiece. I love that statement because it puts in perspective the importance a refined hairline plays in a beautiful design. This is a complicated task as the hairline is where those little monsters called cowlicks meet with uneven density and other irregular growth patterns. Let’s explore some of the perspectives and techniques involved with creating an excellent frame for our haircuts.

As always, every great haircut begins with a thorough consultation. Make sure you get clarity on what the guest’s desires are before making a call on how to refine the perimeter. Probably the biggest variable is figuring out if they want the perimeter to have softness or strength. Some guests are looking for the really clean look of Sassoon inspired shapes, and some will be looking for more texture and softness. These images of Ashlee show two different examples… one with a very disrupted texture in the neckline (which is a big push in current trend) and one with a very clean, almost boyish neckline.

Density and texture play a major roll in the refinement process. Fine hair or sparse density can disappear when it’s cut too short. On the image where Ashlee’s hairline has been cropped in to be very clean, we stopped at a point where the hairline was still visible. Had we gone even 1/8th of an inch shorter, it would look like we shaved it down to the skin. Thicker hair can handle going shorter and not disappearing, but can be a nuisance when left longer because of the bulk. This is where a tool like the Sam Villa Signature Series Invisiblend comes in very handy. This shear removes very subtle amounts of hair with each cut and leaves no cutting lines, so it’s great for getting right down at the scalp to remove the bulk from dense hair textures. Approach the texture with the same methodical approach you did the haircut, work in sections with intent and purpose. Remove weight by placing the solid blade right at the scalp, close the blending shear and comb out. Continue this pattern until you see the density collapse.

The shape to the outside edge of the neckline is very dependent on the natural perimeter and growth patterns. The key is to resist the temptation to manhandle the neckline into something it doesn’t want to be. Work with what happens naturally and you will have a much happier guest. Always approach this refinement on dry hair so that you have the most accurate palate to work from. Ashlee has the little “tail” that most people do where the outside of the hairline pushes into the center. Instead of forcing it to go out through blow drying, we used texturizing (similar to what is described above) to deflate the fullness in the center and then deep point cut that area with the Sam Villa Signature Series 5.5” Swivel Shear so that it could fall naturally and not bunch up. Swivel shears are a favorite for detailing hairlines because they allow you to cut at awkward angles without compromising wrist angle.

The most frustrating part of hairlines is major cowlicks and swirls. Cowlicks are truly a balance of density and length to make them as manageable as possible. The first thing is to go in with realistic expectations, if the hair stands at attention like a cadet on his first day of boot camp, it’s not going to magically disappear. Sometimes, it’s better to leave length that can be controlled through blow drying and product, and sometimes you need to cut it out enough so it’s not an eye sore. Approach hair in its natural state… don’t comb it out or put tension on it with your fingers. Slowly whittle away at it with your blending shears until you see something that is esthetically pleasing and manageable by the guest at home. Again, keep in mind that you are going for “better” not “perfect” as the latter of the two is probably not achievable. Taking density out of a cowlick can make it more pliable for the blow dry, but approach with caution, if you create too much short hair within the cowlick it will make it stronger.

So let’s put this into a neat little package… here is the process for creating the perfect neckline.
1. Establish the overall length
2. Balance density and visual texture through texturizing
3. Refine the perimeter edge

A work of art with a poorly fashioned frame can look incomplete. The next time you look at the pixie, graduated bob, or textured crop you created, take a step back and really examine the often-overlooked hairline. When this detail is dialed in, it creates irreplaceable value in the mind of your guest and assures that they will be in your chair for life. 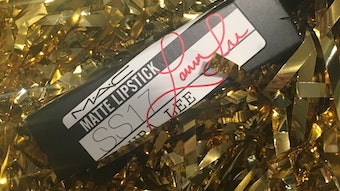 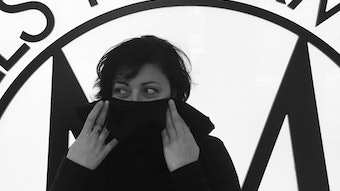 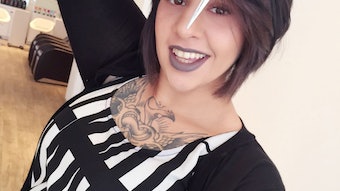