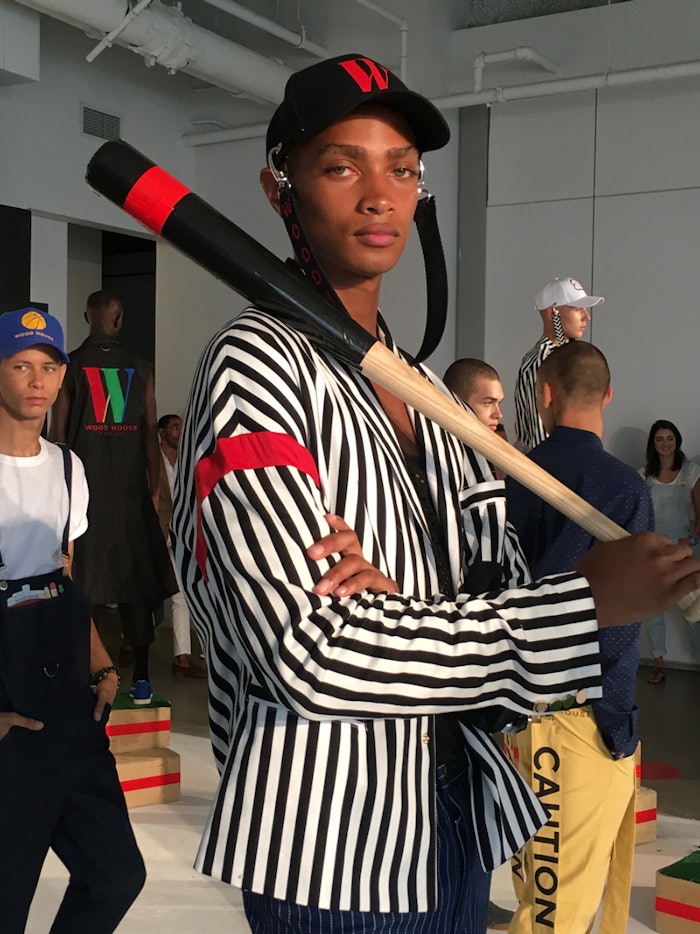 It was a match made in heaven: chic menswear and show-stopping hairstyles at the 8th annual New York Men’s Day (NYMD) at Dune Studios on July 10, 2017. As the kickoff to New York Fashion Week: Men’s, NYMD showcased 12 under-the-radar designers’ Spring/Summer 2018 collections to which the Oribe team paired innovative hairstyles. The hair trends du jour: laid-back and au natural, and sleek and wet. Here, the inside scoop from a few of the shows and the Oribe products used.

If you didn’t get to check a vaca to Cuba off your bucket list before travel became more taboo, not to worry, at David Hart, the wares and hair bring the practically forbidden island straight to you. Think: Models gripped cigars as they rocked bold-hued linen suits, Panama hats and effortless hairstyles with spit curl detailing. “It’s a very wearable, classic holiday resort look,” says lead stylist Kien Hoang, who cited Cuban native Oribe Canales as inspiration for his design. When it comes to working with hats, Hoang notes his secret: “It’s really all about the face framing.”

The boy at Krammer & Stoudt might drop $1000 on a pair of kicks but then will wear them till the sun don’t shine, says key stylist Louis Orozco, adding, “He’s an East Coast aristocrat that can go anywhere in the world but decides to head to Baja California for a surf trip.” So natch, Orozco’s surfer-dude design perfectly complements the collection. “It’s almost like they ran suntan lotion through their hair,” says Orozco, who used his hands and a brush to get gritty, oily, beachy un-showered texture.

Sometimes boys just want to have fun too! The collection at Wood House, aptly given the moniker “Field Day,” features playful, sporty and bright-colored wares designed with the intention of taking refuge from the current political climate to enjoy life. With the clothes making a loud statement (note one hat read: “Making Menswear Great Again. But Really Tho.”), key stylist Dan Nguyen opted to keep the hair simple: merely grooming, trimming and clippering locks. “There's great beauty in doing minimal work—it’s about being precise, detailed and looking at face shapes and hairlines,” he says.

Both the collection and the hair bring the past to the future at Bristol. Think: Models donned relaxed tracksuits and baggy sweatpants that were a throw-back to the designer’s childhood and early 2000s streetwear while Christian Ceja-Compin designed a hairstyle that embodied Clark Gable and ’20s old Hollywood with a modern street-style twist. “[The designers] wanted the hair to be clean, but not as clean as old Hollywood, [so we made it] more current,” he says. The result: off-center parts that aired on the messy side complemented by Marcel waves created with irons that were later roughed up with his fingers to emit an undone feeling. “We didn’t want it too slick or tight,” he explains.

Like a sculptor who uses his hands when crafting a work of art, lead stylist Nathan Nguyen relied solely on his digits to create a multitude of hair shapes at Head of State. “Your hands are your greatest tools,” says Nguyen, who constructed architectural flat, square and round shapes with matte texture to complement the silhouettes and patterns of the collection which was inspired by West African photographers and post-colonial African duds.

One of the first things to pop to mind when thinking of millennials: technology. So too thought French brand Daniel Hechter who geared its collection toward Gen Y’ers with “nature meets technology” as its inspiration. The theme also extended to the hair: relaxed, natural tresses with a soft wave pattern. “I took it as a French guy surfing in Malibu [before he goes] to his new high-tech startup gig,” explains key stylist Davide, who on straight-haired lads created the wave by forming an S-shape with his fingers that he then scrunched and smoothed out with a brush. “It’s super easy, young and fun—we wanted it took like they could easily run their hands through it.”

With a presentation titled “Post Traumatic Combat Stress,” you might expect that every model would sport a shaved military cut. No so at Heliot Emil, where the hair flowed on three gents who appeared to have just stepped out of the shower. “It looks like their hair is naturally dripping wet and it’s a little stringy,” explains Ceja-Compin, who saturated tresses, wrapped them in a hairnet like a Band-Aid, and then used a diffuser so the design would be straight and lay flat against the skin. “It's almost like you’re putting on a mask that shrinks the hair—it controls it from expanding.”

Those slow-moving cowboys ain’t got nothin’ on Hoang, who, like in an Old West quick draw, had his guns blazing, cutting and styling 13 wigs right before Western-themed Private Policy’s presentation. “It was a lot of cutting!” exclaims Hoang, who nipped locks based on face shape, ultimately creating wet, shaggy hairdos. “We looked at features that best made them androgynous or masculine and brought that out.” That’s not all folks: Prior to the show, Hoang also color matched the wigs to the models’ skin tones, creating bright tangerine, ashy, rich chestnut and masculine brown shades.

Dan Nguyen switched gears once he laid eyes on the unisex futuristic Grecian-influenced collection at R.Swaider. “At first we went ultra-contemporary but once I saw the clothes I went with a look that’s still edgy and muted graphic but soft,” says Nguyen, who, keeping with the unisex theme, styled both the ladies and gents with the same slicked-back coifs, which he saturated before molding, tying with knots and anchoring with pins. “The hair isn’t masculine or feminine, it just looks like they came out of the pool but it’s not soaking wet so it looks more fashion-y.”

At Life in Perfect Disorder there aren’t any rules when it comes to boys vs. girls. “The collection concept was genderless—the designer [believes] that girls can wear boy’s clothes and boys can wear girl’s clothes,” says Nathan Nguyen, who looked to Chloe Sevigny for inspiration for his lived-in, matte, grungy design. “It’s like hair that hasn’t been washed for a week.”

Short, medium, long, super long—it was anything goes when it came to the tresses at Maiden Noir. Lead stylist Mandee Hernandez set her sights on the designer’s inspiration—British artist David Hockney’s bright colored paintings and the ’60s Vietnam War protest era when he created them—when thinking of how to style the slew of lengths. “I mixed them together so there’s both light and free hair as well as utilitarian looks,” she says. Think: shaved heads, strict lines and parts, and lots of wavy hippie-like locks set with hands and pins.

With models standing behind masks that mimicked patterns found on wares in the Descendant of Thieves collection, Orozco knew the hair needed to be more subdued rather than over-the-top. “The designer originally wanted feathers and big hair pieces but with the masks [I thought] the hair should be more polished,” says Orozco, who opted for slicked-down locks with geometric parts, opting to leave anything above the ears or at the hairline soft. “It’s a bit undone and has almost more of an effortless look on the ends,” he explains.