Van Tibolli, Corp, developer of leading haircare products GKhair and Tibolli, today announced the appointment of Misha Belfer as International Creative Director. Misha has held prior roles with VTB as an International Platform Artist, Resident Master Stylist and educator.  Misha has been a trailblazer in the hair care industry for 13 years since his career began in Denver, Colorado.

ings a tremendous amount of experience, passion and most importantly ingenuity to Van Tibolli, Corp,” said Van Tibolli, Corp CEO. ”To couple the brands GKhair and Tibolli continued growth with Misha’s own explosive advancement is a huge opportunity for both – we’re excited about the creative vision he will bring to the hair company!”

Misha credits his own creativity with a deeply-rooted appreciation for art in all forms that stems from his grandmother and childhood in Moscow, Russia. Misha notes, “I was taught to see beauty in everything as it exists, but to always appreciate the perspectives of others.”

After many years as a stylist, Misha was brought onto the brand Schwarzkopf Professional as a Technical Advisor. He then went on to become Director of Education for Kevin Ray Distributors in Denver. He initially made a name for himself as a hair stylist for dance competitions worldwide where he also competed as a dancer, at Blackpool and also starred in “So You Think You Can Dance” as the first male-duo dance partners televised.

In his career, Belfer has styled hair for fashion shows, trade shows and has worked as an educator traveling the world. Mr. Belfer has traveled from Russia and Latvia to England, Italy and throughout the United States.

How to Re-create Pinterest’s Trendiest 2022 Hairstyles

These 10 hairstyles will turn heads and get your clients party-ready, just in time for the busy 2021 holiday season.
Nov 17th, 2021

Your holiday shopping just got easier: Check out this assortment of festive pro-beauty kits.
Nov 9th, 2021 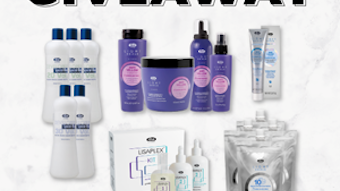 Hairstylists on Instagram have run the gamut from all-out Halloween spirit to sweet and simple color creations.
Oct 21st, 2021

The hair color perfectly meshes orange, copper and blonde shades for a style that is quintessentially fall.
Sep 28th, 2021

We have rounded up 10 of the night's best hair looks for a variety of hair types and textures.
Sep 20th, 2021

Why You Need To Try The Iridescent Hair Trend ASAP

The Readers' Choice Awards are nominated and voted for by the industry, making it the awards to determine what is the best in the market.
Jul 30th, 2021
Follow Us
Most Recent