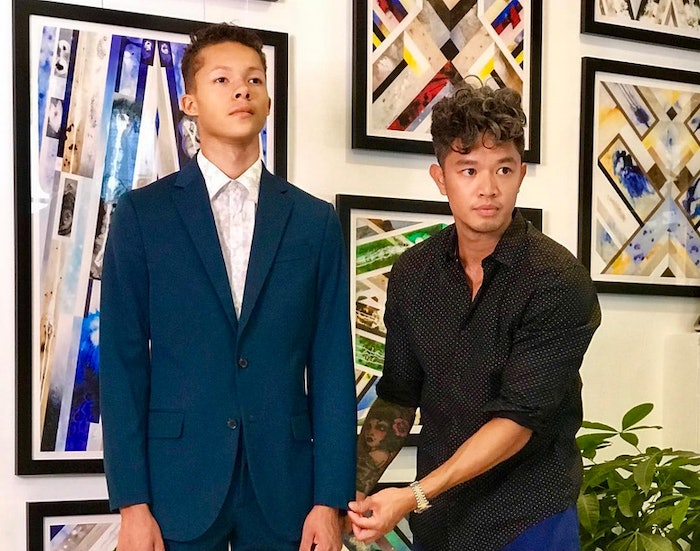 Mark Bustos has a reputation for kindness and philanthropy. He cuts hair for the homeless and founded Be Awesome to Somebody, which is described on its Facebook page as "a platform for individuals to share their gifts and talents to those who are less fortunate than we are."

So it's no surprise that when given an opportunity to work with JC Penny, he used it to help another.

"When major companies like @JCPenney reached out to me - beautiful magic can organically unfold. Thanks to the JCPenney Men's Fall Wardrobe Sale, I was able to take Palace shopping - my young friend who I randomly approached on the streets of NYC a few weeks back when I was in search of a hair model for a photo shoot. Palace was in need of a clean, fresh, and professional look.

"Here’s why.... Palace grew up in Washington D.C. without a father figure and an unstable mother. He is a gentle, humble, soft spoken, and obviously handsome young man. He struggled with mental abuse and would wear the same dirty clothes everyday to school- only to find himself skipping classes to take care of his siblings. It was when his mother made him build a tent to sleep on top of piles of dirty clothes that he left and stayed in hotels with a friend.

"Palace reached out to his cousin in NYC for help and within 24 hours, he arrived to the big city. He has been staying with his new guardian angel who just gained legal custody of him. I connected Palace to a modeling agency in NYC- where he ended up signing a modeling contract! He was called in for 11 casting calls this week for NYC fashion week and is scheduled to grace the runway for the BIGGEST designers in the fashion industry. Thanks to JCPenney- Palace has a new suit to walk into his interviews for his new found success as a fashion model. Palace—it’s your time to shine kid!!"

He followed up by sharing that Palace walked his first-ever show at New York Fashion Week. "My dear friends, meet Palace-Diamonte Scorpio Gonzalez, @palace.diamonte, walking his first runway show ever at NEW YORK FASHION WEEK for @KITH in collaboration with @tommyhilfiger."