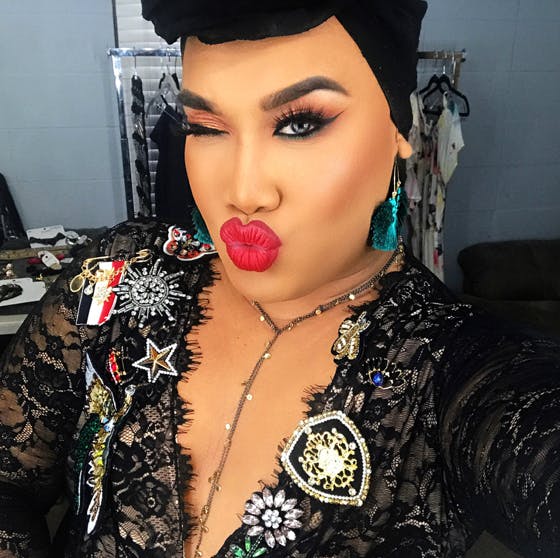 On November 9, my makeup dreams came true in the form of an interview with Patrick Starrr. If you don’t know who he is, you should. Starrr is a makeup artist, influencer and co-host of the upcoming American Influencer Awards in Los Angeles! Paving the way for boys in beauty with over 3.5 million followers on Instagram, Starrr is here to stay. But more important than his number of followers is his heart of gold. Read on to find out what we talked about.

1) Patrick named fellow American Influencer Awards co-host Kandee Johnson as one of his biggest influences in beauty. He described her not only as a “legend” but also as a figure he has admired and looked up to for many years.  He couldn’t be more excited and honored to co-host the awards with her.

3) Zoella: He described her as "the ultimate girl next door and one of the sweetest people."  With 11.2 million followers on Instagram, it's obvious that Starrr isn’t the only one who has fallen in love with her.

Sam Visser: He recently appeared on Keeping up with the Kardashians, and knows the influence that the family has in the world of beauty. Visser is currently one of the Kardashians' youngest makeup artists (17), and has worked with the legendary Mario Dedivanovic. If you’re not following him already, you should. He’s one to watch.

Advice for Other Artists

Starrr’s top tip: Don’t pay attention to the numbers. Surround yourself with positive, great people and focus on your craft and love of makeup. Be active on social media, get to know people in the community, attend trade shows, and create great content. Also make sure you have clean brushes.

The American Influencer Awards is the first of its kind and Starrr is excited not only as a host, but as a nominee. He’s ready to rock his outfits (hello, Michael Costello) and doesn’t feel any pressure—at least not yet. Starrr has inspired so many and not just with his makeup; his positive attitude and willingness to embrace and be his true self have inspired millions. He lives by the words, “Life opens up when you do,” and it seems that his career in makeup and life as an influencer is just beginning.

The American Influencer Awards will take place in Los Angeles on November 18, 2017.  Tickets are available for purchase at aiaawards.com.