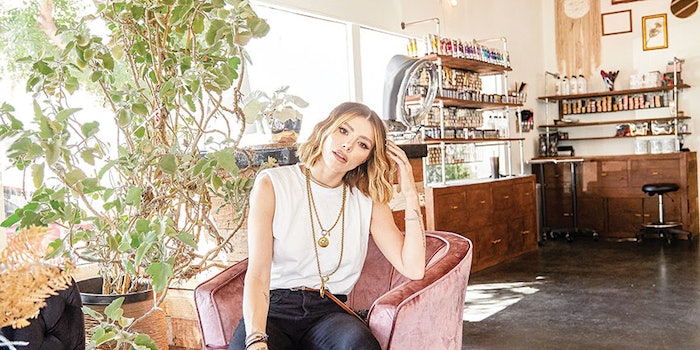 Back in January 2017, Larisa Love (@larisadoll) opened her namesake salon in Studio City, California. Influencers from across the country came to the grand opening soiree—hair extraordinaire Phil Ring flew in from Rhode Island, for example—and a line of partygoers formed outside the doors hours before they opened. Hundreds of guests delighted in Love’s fabulous new space that, in addition to five chairs on the main level, boasted an exclusive loft for Love and her clients. Opening Larisa Love Salon was the crowning jewel in a string of successes for the then-27-year-old, and she was on top of the world.

For the past three years Love has continued to build upon her success. She’s now a Joico brand ambassador, not only educating for the brand around the globe, but also collaborating on trend collections and creating viral content. And on top of that, she has launched a salon apparel line and recently became engaged to her longtime boyfriend, musician Sebastian Danzig. Nevertheless, despite all of her success, Love began to realize all was not right.

“My main goal in life was to open my own salon,” Love says. “I had it for three years, and then I was thinking, ‘Now what? Did I cross the finish line?’ I feel like I’m just getting started.” Love discovered that being everything to everyone was taking its toll. Time on the road meant less time to mentor her stylists. She wasn’t able to accommodate as many guests as she wanted to. Something had to give. And that “something” was ego.

“For a year I went back and forth about what to do with my salon,” Love reminisces. “But after some serious soul-searching, I let go of my ego and stopped worrying about what people would think of me, and decided to follow my heart. I downsized and opened a boutique salon.”

Love says that many salon owners struggle with the decision to downsize or change their trajectory because of others’ perceptions. She wants all owners to know that doing what’s right for them isn’t failure or them not being team players. “All salon owners should feel proud of themselves, as they’ve achieved something remarkable,” she says. “But in reality, we all have different chapters in our lives, and we all evolve. And sometimes, we evolve into something different than what we originally thought.”

The new iteration of Larisa Love Salon is still in Studio City and bears Love’s trademark decorating touches—natural wood finishes and fresh plants—but has a much smaller footprint, and she is only working with assistants. “This has been the best decision I’ve ever made in my life,” Love enthuses. “The easy thing would have been to keep my old salon. But everything would have been taken out of me and I would have been pulled in every direction. Now, I’m inspiring my assistants, focusing on education and developing new techniques, and giving much more to my clients. I’m so excited for this next chapter.”

Cosmetify releases its 2021 Hair Report on the most searched-for hair looks and more.
May 3rd, 2021