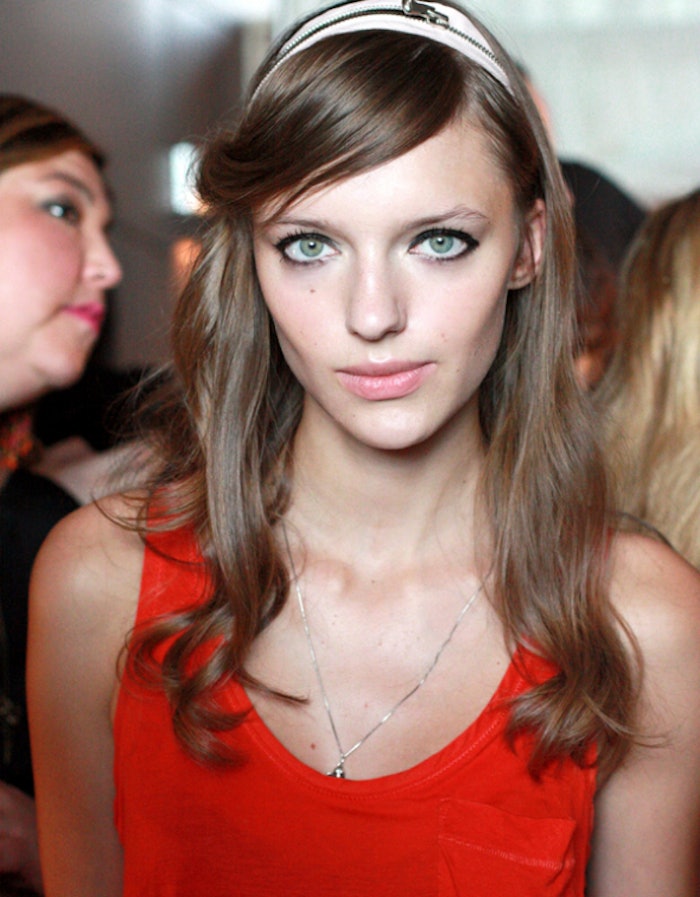 Not often do I get to conduct my backstage interviews on a hotel deck with views of the Hudson River. But such is the case at Erin Fetherston’s Spring 2013 show, where I’m seated outside asking Butter London‘s Katie Hughes what the nail inspiration is as she works on the designer’s nails. “Erin’s collection is soft and girly, but it’s got an edge,” Hughes says. “We want the nails to act as accessories because Erin’s opting not to have jewelry on the hands in the show.”

Naturally, the designer herself chimes in. “I almost want the nails to look as though they replace the jewelry,” she asserts. To achieve this nails-as-accessory feel, Hughes paints some girls in Butter London Lillibet’s Jubilee, a lilac-laced silver, while others receive The Full Monty, a soft gold. The two colors, which Hughes describes as “neutrals,” are an easy way to ease into metallics on nails. “Neutral metallics are extremely user-friendly,” she says, “and we’re all about being user-friendly!”

For hair, I track down Odile Gilbert, who’s working with Kérastase Paris and has escaped the tiny backstage area in The Standard Hotel to get a breath of fresh air. “I can’t believe it’s only the start [of New York Fashion Week],” she says as assistants ask her various pressing questions about extensions (some models receive wefts, depending on how fine their hair is). She tells me the look is sourced from Brigitte Bardot while she vacations in Saint Tropez—tousled, relaxed, full of body—but that she wants to toughen it up and is doing so in the form of a headband that features a functioning zipper.

“The zipper is open, and we’re taking the [bangs] and pushing them to the front, down on the forehead, and then twisting them to the side, and sticking them back inside the zipper opening,” she explains.

She preps damp hair first with Mousse Volumative to build up necessary Bardot-esque body, blow-dries tresses, and then loosely waves the hair with a large curling iron. After positioning the headband and twisted side-bang, she blasts Double Force Hair Spray to set her hairstyle and adds gleam by way of “a tiny bit” of Elixir Ultime Rose Milleanaire oil run through the lengths and ends. —Karie L. Frost

(Middle image: courtesy of Butter London; all others by Karie L. Frost)

When Dark Roots Are In: The Supermodel Edition

What Career Goals Do You Hope to Accomplish By the End of this Year?

How to Set Goals as a Salon Professional